Most creatives love to travel to enhance our experiences of the world, seek inspiration and visit iconic museums. Recently, husband Bob and I embarked on a 12-day vacation to Amsterdam and Iceland. Before we left, I speculated we would experience a contrast in colors, but I did not know what other gems we would encounter.

For fun, I have created several photo collages to highlight this Amsterdam vs Iceland experience. They are two eye-catching countries. By the way, the weather was chilly – ranging from 42-52 degrees — rainy and cloudy for much of the trip, though you will see a few blue skies in my photos. The most spectacular weather day was while we were visiting the Kuekenhof Gardens where the tulips were on masterful display. It is actually an 80 acre park with over 7 million tulips!! I was thrilled because this was the main reason I wanted to take this vacation. The tulip gardens had been on my bucket list for years.
For starters, these two photos below show you my view from the airplane while landing in Amsterdam (left photo) and then landing in Iceland (right photo). Iceland’s overall landscape feels like an inhabited moonscape that holds some fascinating natural wonders. 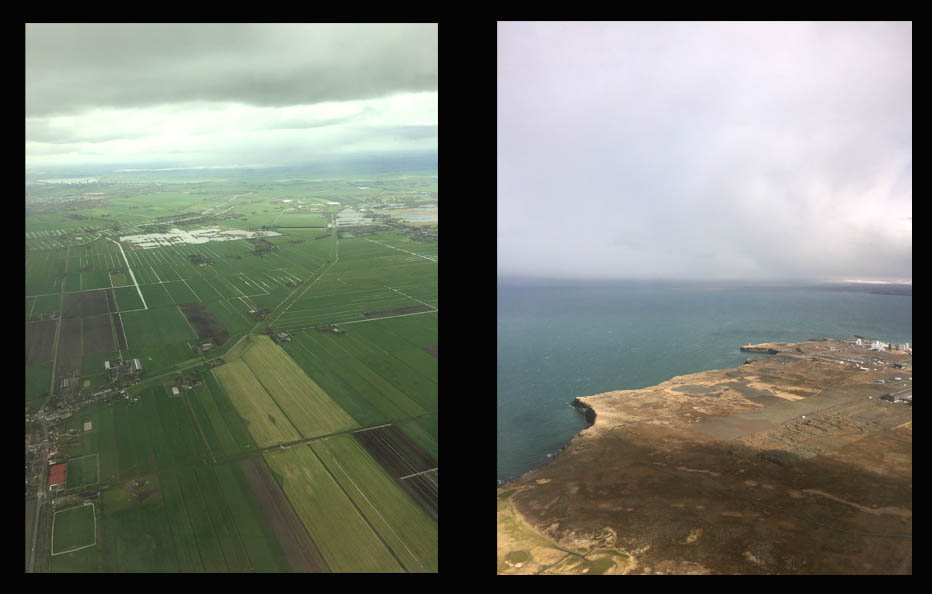 Amsterdam is noted for its canals and boat houses, whereas Iceland is famous for its waterfalls and rainbows. Unfortunately we did not see any of the latter. The wind was blowing so hard that day at the falls, I could barely hold the camera. It is a spectacular waterfalls – very Niagara Falls like.

Tulips were in abundance in and outside of the famous gardens as seen on the left. We spent 3.5 hours there and still did not walk the entire park.  The Icelandic alphabet is bursting with 32 characters. I thought you might like to try pronouncing these two Icelandic town names. Do you think texting might be a challenge in Iceland?

Visiting the inspiring Van Gogh and Rijks Museums was another real highlight. Here I am up close and personal with Rembrandt’s “The Night Watch.” I stood there in awe as I tried to imagine painting this in 1642 and at the size of 12 x 14 ft! Meanwhile, I saw this curious looking waterfall along an Iceland road. It shimmered like metallic copper. This rock is called jasper.

The fields of tulips were alive, whereas in Iceland the moss covered lava rock with the occasional mountain were a very frequent sight as we drove the countryside. Many of the mountains would jut straight up from the ground in muffin like shapes.

King’s Day is celebrated every April 27th in the Netherlands (technically Holland is a province of the Netherlands). It is an excuse to wear orange, party all day and hail to the King. Many revelers were in boats on the canals. It was great fun.  In Iceland, we were excited to see the geyser show itself. Geothermal energy heats much of the country. We visited the self-sustaining energy plant (there is no waste), which was enlightening.

Taxi drivers and tour guides told us that there are more bikes in Amsterdam than there are people. I believe I heard them say there are over 1.2 million bicycles. One does need to be careful when crossing the street because they can be hazardous to your health. In contrast, Iceland, it seems, is covered with green moss. Is there an abstract painting in there somewhere?

The Netherlands have their windmills and Iceland has the Blue Lagoon Geothermal Spa. It is actually this color of blue and those are black lava rocks. Thousands of people enjoy this hot spring every year. I can only imagine what it would be like late on a summer evening.

In the city of Reykjavik, Iceland’s capital, many two story murals can be found while walking the streets.

As you can well imagine, I took many photos of tulips within the gardens. Here are a few of my close-up favorites.

And no vacation would be complete without live music. It is difficult to imagine the comprehensive sound of a symphony orchestra produced by two violins, three accordions, and a tuba, playing Bach and Vivaldi!  That’s what we heard from the Russian musicians of “The Compatible,” under the tunnel running through the Rijks Museum. In contrast, but equally surprising, was this group of Icelanders playing salsa style music from the Caribbean in the stunning performing arts center in Reykjavik.

Thank you for joining me on this journey and that you enjoyed my Amsterdam vs Iceland comparison.  This trip was truly a visual feast. What will my artistic brain and heart create as a result? I have no clue, though I know the images and interactions will incubate and manifest in some unexpected way.
Where have your travels taken you? How have they influenced your work? I would love to hear about your experiences and subsequent impact.
If you enjoyed this post, please feel free to share it.