Being creative, be it painting, writing, composing, sculpting, problem solving, etc., is something that is essential to our souls. We have to do it and for lots of reasons. As much as creating is a driving force in our lives, it is never a smooth ride. We all run into times when we feel stuck or it feels like quick sand or we bemoan, “This is hard!” Yes, it is and you are in good company. If it were easy, everyone would be doing it.

Have you ever stopped to think about the common places when creatives get stuck or question their ability to continue? Or considered the general phases of the creative process? In this blog (Part 1), I will be discussing the latter question first.

The creative process has been studied by various scholarly fields for centuries. Because it is a mysterious process, creativity has always enamored us. Many attempts have been made to articulate it so that it can be better understood.

When I researched literature about the creative process several years ago, I learned that the sequential stages were first defined into only four phases.

In Graham Wallas’ 1926 classic The Art of Thought, he summarized the creative process as follows:

Variations of the above creative process have been developed over the last century with a few additional tweaks and language changes. Boldly, I added a stage that I thought was missing!

These defined stages have essentially evolved into the following. Can you guess which one I added?

Why is it helpful to know these stages of the creative process?

Some of you may want to brush it off because you believe it is not possible to define something that is as allusive as creativity OR believe it might interfere with your own process OR it is too much of an analytical exercise. Those reasons are all valid. I, however, like to part-take in such an analysis (it’s the psychologist in me) because knowledge provides clarity and power.

Once I had insight into the various stages of the creative process, I was much more able to understand the many highs and lows that I have experienced and continue to experience. With this understanding, my frustration decreased significantly, and my confidence increased.

First Insight—step 1—is the process of becoming aware of a problem and knowing that something is missing. Creative people seek out problems through questioning and observation—to discover gaps or problems that no one else has perceived. When starting a new painting, the ‘problem’ you may be solving could be: the need to visually express yourself, the need to practice

Once the idea has been identified, the next activity, referred to as the Saturation—step 2—involves retrieving more information, collecting pertinent data and formulating specific questions. This research can take place within a very short period of time or it can take years. This can also be the the time of learning new skills.

The Incubation —step 3—the processing of all of this input is then necessary.

Sometimes the creative engages in other activities, even unrelated, while this data merges, sorts and stirs, and ebbs and flows between the conscious and the unconscious. This allows our unconscious the time to massage all of the information, like kneading bread, and is essential because one cannot “push the river.” The unconscious must percolate to make the connections that the conscious mind cannot make. As in Step 2, the time involved for this stage can vary significantly – from hours to years.

Step 4—Then suddenly an adrenal surge springs forth seemingly out of nowhere. Eureka occurs or Illumination, and the idea takes form. A potential solution seems imminent. This stage is the shortest within the entire process. All of us have experienced these exhilarating moments when we have been trying to solve a problem—of any type—and suddenly a resolution pops into our heads, like igniting a fire.

Verification/Production follows as step 5. It encompasses the actual doing or production of the solution. People, particularly non-artists, often think of this hands-on activity as the only time artists are creating because the output is visible—in other words it is concrete. In actuality, we have been ‘creating’ long before this occurs.

Sometimes when I begin gathering my resources for a project or a painting back in thr Saturation—step 2, I have already made small contributions to this verification stage of the process. Other times within Step 5, I encounter painting problems that require a mini-like cycle of the creative process, which means I cycle back to First Insight to improve upon the idea. (I have this indicated in the below graphic with the light blue circle.) Obviously, creativity is not a linear process, but a circular one.

Two subsets of the verification stage are Confirmation—step 5a, and Validation—step 5b. This is the time of internal confirmation and external validation. Some creatives need only internal satisfaction, whereas many need the validation from others as well.

The Separation/Letting Go —step 6—involves the processing of separating from what we have created. This stage is necessary because we need to mentally separate from our creation in order to begin the next one. This is the phase that I added to the creative process. What do you think? Do you not believe it is an important step? Letting go of a painting can involve selling or giving it away, as well as destroying it or putting it in storage.

This graphic articulates how I delineate the steps in my creative process. 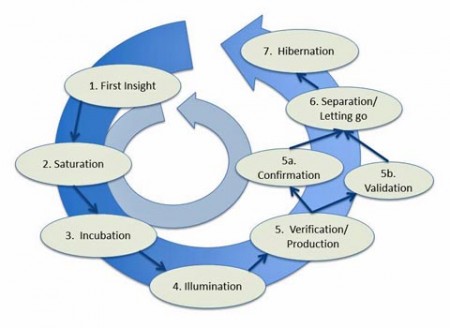 Finally, as outlined above, the last stage is Hibernation—step 7—is the time whereby we creatives need to re-fuel. During this phase, we can sometimes go dormant because the effort was mentally, physically and emotionally draining. This stage can be short or long. Some of us have rituals for this phase and/or know that we need to do something to nourish ourselves before we continue.

What are your thoughts about the creative process? Do you identify with any of these stages?

In Part Two, I will point out the two stages where creatives typically get stuck and/or even quit. Upon reflection of the above, where do you think we creatives get entangled in the cobwebs?

If you found this information helpful, please share it with others and use the buttons below.