When Hunter’s mother was explaining to a friend that her 5-year old son wanted to be an artist, he immediately piped up and proclaimed, “I am ALREADY an artist!’ She was surprised to hear this emphatic statement and his passion about it.

Out of the mouths of babes and innocence comes authenticity and confidence. Don’t you love it?

I like this story because it made me reflect upon my first career proclamations. I know that it was not to be an artist. Most likely it was something related to an event or a professional that I had recently met or experienced such as a dancer or a teacher or a house builder. 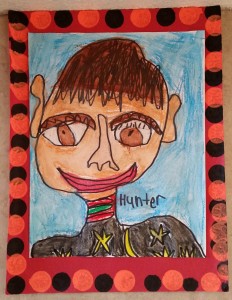 Lisa, Hunter’s mother, told me this story a few days before my annual open studio event that I have every fall. She came to my studio on her own. After perusing my work and continuing our enjoyable conversation from a few days earlier, she decided she wanted to return with her son, now seven and a half years old. A couple of hours later, Lisa, Hunter, younger brother and dad all arrived.

Upon entering my studio Hunter looked up and around and stated, “This is awesome!” Wide-eyed he proceeded to look around, not just at my paintings but at many of the other studio items. He particularly liked the easel.

I had suggested to Lisa to bring some of Hunter’s art work along so that I could look at it. 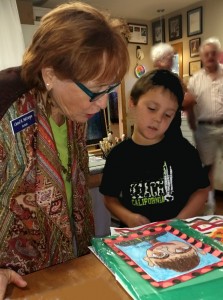 His, and my favorite, was his recently created “Self-Portrait.” He was given this assignment from his teachers. Notice the details of his sweater and nose. Don’t you love the frame around it? I like his confident line as well. Of course, the overall feeling of the self-portrait is a delight, in addition to the fact that it reads as a finished piece.

Several days later, I decided to call Hunter to ask him a few more questions about his visit to my studio. (I must add that I cannot remember the last time I had a telephone conversation with a 7-year old. I wasn’t sure what to expect.)

I asked him if he would like a studio when he is older. He responded with a definite, “Yes.” And in his studio, he wants an easel and all kinds of stuff to make art. During our conversation, he agreed that he knew that he liked to make art more than his friends and other kids in his school. “It’s fun. I like how it looks.”

Then I asked him what he liked most about visiting my studio. Hunter said, “I like that you have something hidden [in your paintings].” I remember that he made a special trip around the studio looking at each of my paintings searching for the surprise element I often insert into the images. For example, in my “Windows into Your Imagination” paintings,“ I often include an antique key.

I look forward to seeing how this young artist develops. Is there someone in your life that has inspired you? Or is there a young person you are influencing? 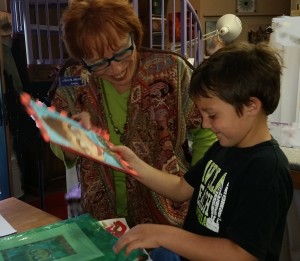 When did you know you wanted to be an artist? Was this something you proclaimed to others or did you keep it to yourself?

I would love to hear your comments. Please leave them below and share this post with others.