How often have you walked into a room or museum and been overwhelmed by the creativity of one person?

This past April I had the wonderous opportunity to spend nearly 3 hours in the Vincent Van Gogh Museum in Amsterdam. It had been suggested that I go before we left for the Netherlands, but no one had raved about it. And I admit, when I first saw the building I was not enticed because the architecture didn’t convey Vincent Van Gogh — in my humble opinion. 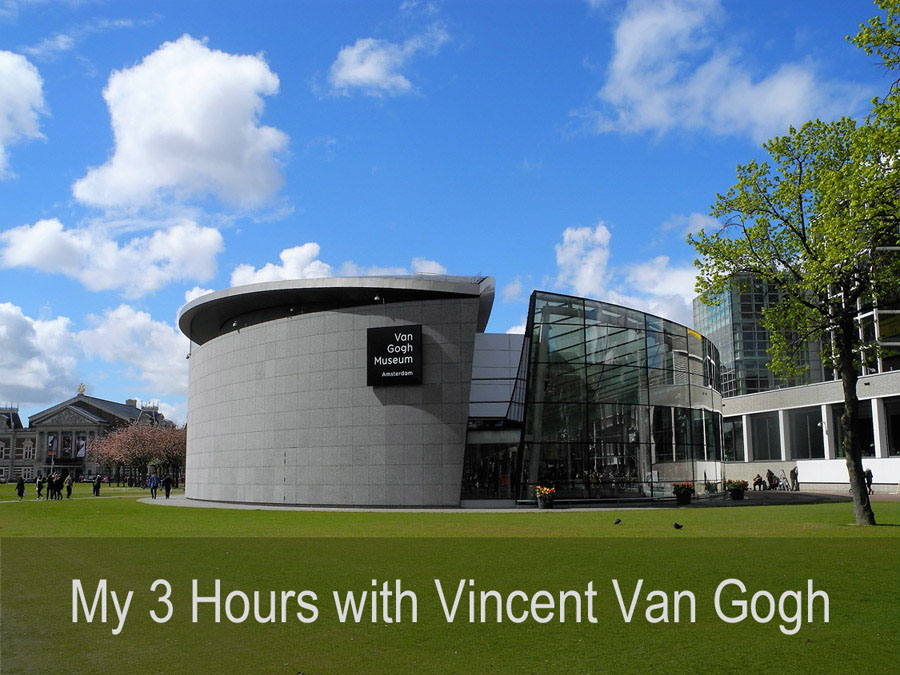 Carrying this bit of indifference and perhaps lower expectations into the museum probably helped to set the stage for the swing of emotions and thoughts that surfaced once I stepped inside. Being surrounded by his genius was jaw dropping. I wish I could offer a photo of the interior. I was too in awe to think of taking one and then was told that photography was not allowed anyway.

Vincent Van Gogh and His Genius

Did you know that he painted 29 self-portraits? I would love to know where the motivation for this came from and what he gleaned by painting them. How many self-portraits have you painted? I confess, that I have never done one though I have an inkling that Van Gogh just might nudge me to do one.

Wouldn’t it be interesting to see all of his self-portraits in a single exhibition and in chronological order? 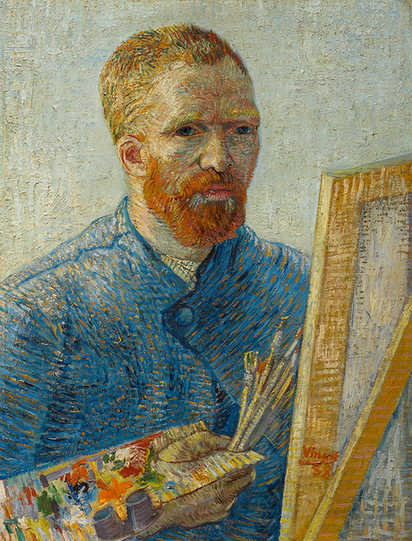 The contrast between his self-portrait as a painter above and the portrait “A Head of a Prostitute,” below is fascinating. The brush strokes are alive in both, yet very different. It is interesting to compare the use of intense colors in one, while using muted colors in another. Apparently, he energetically experimented with his tools and colors. Oh, how I would love to have a video of him applying paint and observing the sequence of layers. Wouldn’t you? 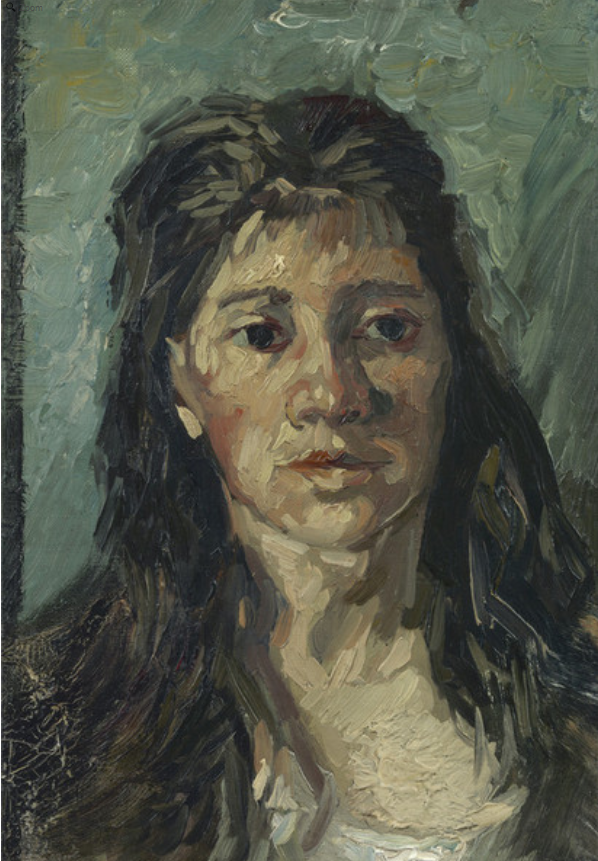 Walking around the museum was mind boggling and inspiring. I selfishly wanted everyone else to go away (hundreds of people go through this museum daily) so that I could just sit quietly and take it all in. I imagined meditating in the various rooms….meanwhile wishing to soak up some of his spirit, vision and talent.

He wrote over 850 letters, painted 74 paintings during the last 78 days of his life and who knows how many total paintings he created all the while not selling one of them in his life time.  And he only painted for 12 years, while battling emotional upheavals. Can you wrap your head around these accomplishments? I know I can’t.

We are fortunate that his brother Theo knew and believed in Vincent to the point that he financially supported him the best he could. (What does it say about Theo that he kept all of the letters?) Then I learned that it was Theo’s wife, Johanna van Gogh-Bonger who promoted Vincent’s work after both Vincent and Theo were deceased! (BTW, Theo died 6 months after Vincent’s death.) She was dedicated to establishing his recognition. In 1914, she published the letters between the two brothers. We have her to be grateful for the opportunity to know and enjoy Vincent Van Gogh’s work. A great woman was behind a great artist.

Vincent Van Gogh was a Student of Color

Because of his seemingly intuitive brush strokes, I sense that many painters believe that his use of color was also intuitive. I learned in a previous exhibition of his work, and it is was evident in the Van Gogh Museuem, that he was an ardent student of color. He was aware of how color impacted mood and vibrancy, and how it carried his visual message.

Notice the mood he conveys in this nearly monochromatic scene. It is very cool, yet he sparsely includes the warm oranges in the foreground, while having applied an under painting of cool (green) yellows in the far background. Complex, yet simple. This only comes from study and practice. 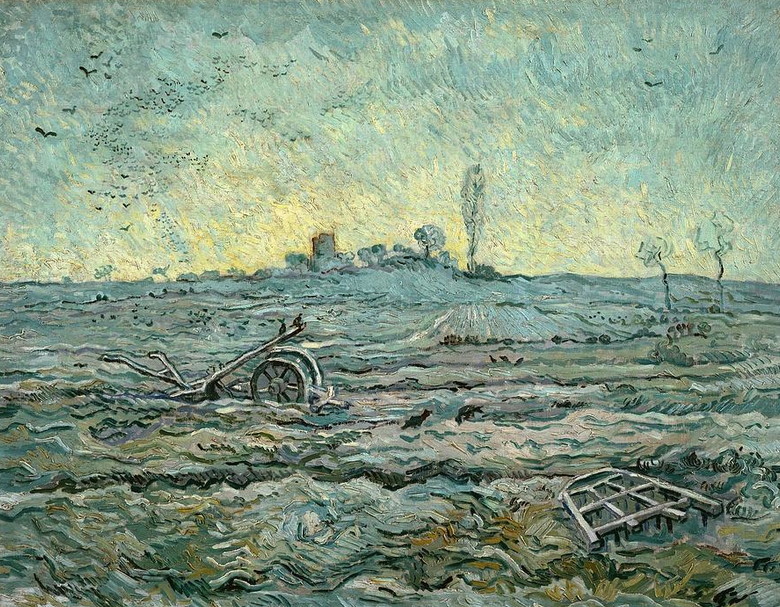 When you imagine sunflowers in a painting, don’t you immediately think the artist would paint the flowers with bright saturated yellows and oranges? Van Gogh did do this in other sunflower paintings, but in the one below, the saturated colors are in the vase and background behind the de-saturated sunflowers. What is your reaction to this painting? Would you consider using this strategy in your next floral painting? 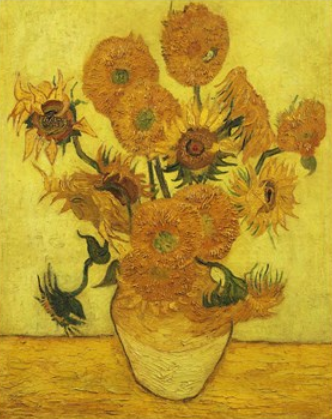 This next painting “A Crab on its Back,” shows how he used the complementary colors of green and red. I also like it because there is such a variety of brush strokes from foreground to background. The energy these strokes give to the subject is also captivating.

Scroll back up the portrait of the your woman and compare how he used the same color scheme yet mixed the reads and greens and applied them quite differently. 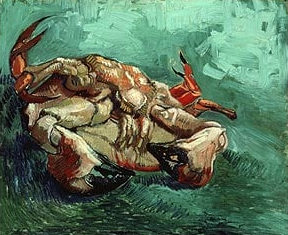 Visiting the Vincent Van Gogh Museum was a surprise highlight of our time in the Netherlands. I left wanting more. Experiencing that kind of commitment is compelling, subsequently inspiring.  The short time I had will be treasured.

What exhibit or museum has inspired you?

Initially, my main motivation for going to the Netherlands was to experience the famous tulip gardens. They too were beyond comprehension…..the colors were glorious. For more on our trip to Amsterdam and Iceland, visit: Amsterdam vs Iceland – A Visual Contrast.