Last week my final book files were sent off to the printer in China. YIPPEE!

I have been working on I Just Want to Paint: Mixing the Colors You Want! obsessively for over a year. I’m supposed to be doing an Irish jig and jumping for joy?! Shouldn’t I feel exhilarated or have a great sense of accomplishment? Instead, lethargy ruled the day. I was greeted with a big surprise. I had hit an emotional and physical brick wall.

I could barely smile because all I could feel was total exhaustion and depression. To make things worse, I couldn’t figure out why. What is this? Sure, a little let-down made sense, but this was much more debilitating and my body literally hurt. People around me the past few months had heard me complain of being tired and brain dead, but nothing like this.

On the second day of depression, as I was leaving the house (I knew I had to keep moving) for an errand, I said to my husband Bob, “Maybe this is like post-partum blues? Could you look up the symptoms?” When I returned home, he had discovered that there is something called “post creation depression,” and had sent me several links for articles on the subject.

Really? As you may know, when we are feeling alone, finding a tribe with similar experiences will cause that sense of loneliness to dissipate. Now I felt less crazy because I could label it. In one article it states, “Giving birth to your first book is a recipe for post-publication depression.” Who knew? I am grateful Bob was willing to do this research for me. Interestingly, none of the book publishing consultants or coaches I have met, had meetings with nor read on their websites have ever mentioned that their authors experience the blues after publication. I think they need to!

Did the sense of depression go away quickly or only last a day or two? No, but then I reminded myself that I had the wisdom (being in my sixth decade does have its benefits) to accept my body’s message and let it be. The sense of exhaustion was so deep that I couldn’t even sleep during the day, let alone read and sleeping through the night wasn’t happening. TV was a bore after a couple of hours. I felt like a flounder in the grocery meat department.

Fortunately or unfortunately, depending how you look at it, my brain doesn’t turn off easily or should I more accurately say willingly. So I started journaling to help explore this uncomfortable phenomenon. It motivated me to take time to do some self-reflection. 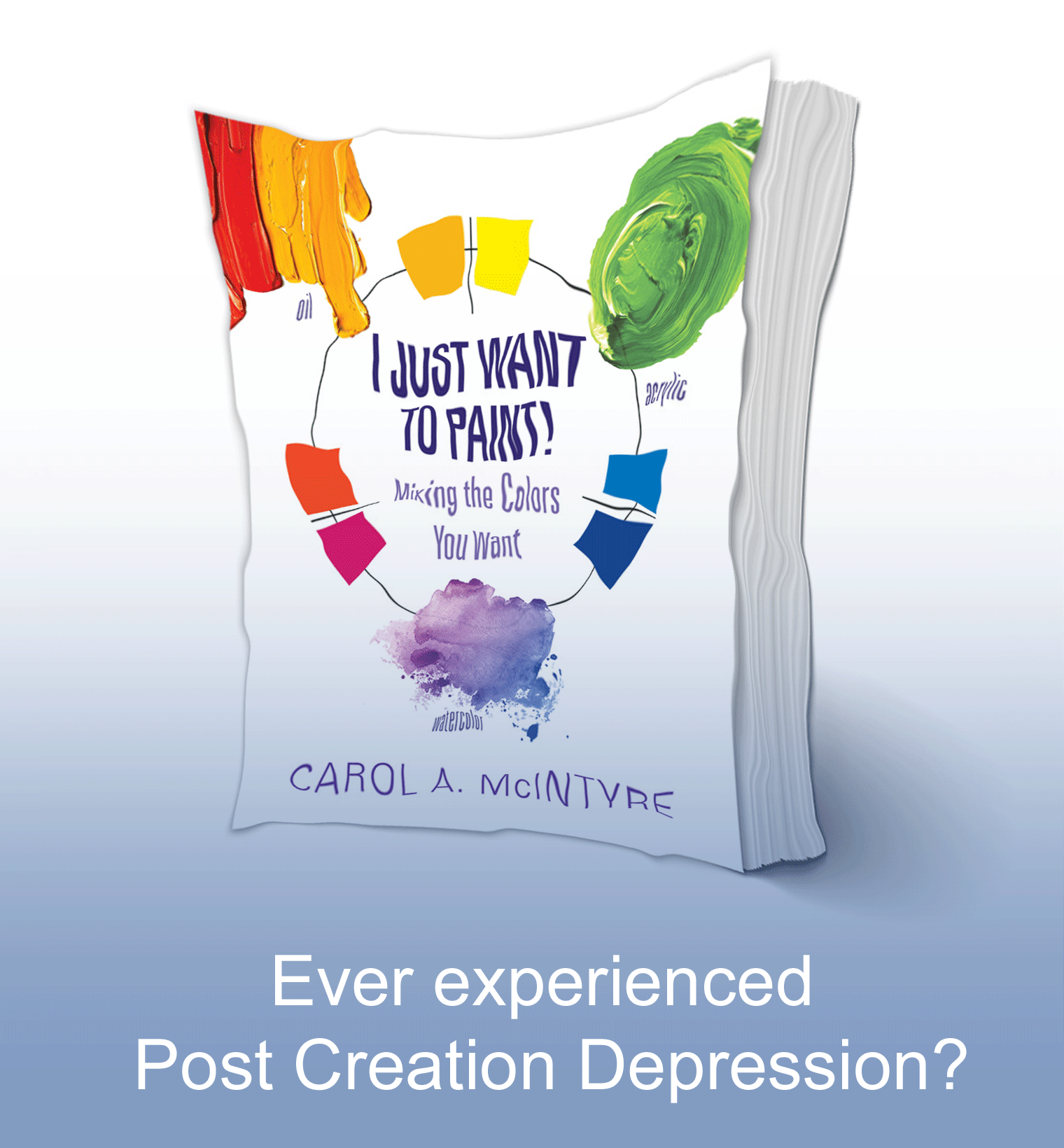 First, I went back to ask the question, which many people have started asking me, “How long have you been writing I Just Want to Paint?“ I could never answer that question confidently because it feels like forever. Fortunately, Microsoft Word keeps tracks of dates and I was able to discover that my first start of a book on color was in 2011! Then my research revealed that my first blog on color was in 2010 (on another blog, not this one).

In 2013, I had started writing a series of books on color. There were going to be three books. A draft of the first one was titled. “Smart Artists Study Color to Sell More Paintings: An Easy Step-by-Step Approach to Mixing & Painting with Complementary Colors.” Isn’t that a mouthful? LOL! I also found I wrote an ebook entitled, “From Mud to Magic.” All the while I doubted any success with these color book ideas because they were not different enough from the current books on the market. So I kept trying to to determine how my color teachings were different. It was a period of incubation while continuing to write blog posts about color.

A light bulb came on in early 2017. I would write only about MIXING color and structure the content with just this focus…nothing about applying color or color schemes or additive and subtractive color or color history. Keep it simple! Shortly thereafter my title “I Just Want to Paint!” emerged and resonated. I was jazzed because I knew no other book existed like this. The first outline was written in May 2017, and I have been at it ever since.

Additional reflections that I believe contributed to my post creation depression:

One other observation made me realize that I never doubted my desire to write I Just Want to Paint! and I never wanted to quit. This was good to notice.

Interestingly, several of the articles on post creation depression or post publication depression discuss the author’s disappointment regarding the lack of support from friends not buying their book, or the fear they wouldn’t be on the Best Seller’s List. These are not paramount in my mind. Fiction writers wrote about missing their characters and how that contributed to their blues.

My book hasn’t been published per se because the printed book will not be available until early 2019, but the final completion of all of my writing, thinking and step-by-step painting examples, was over. All the excitement which has been building for months and months is suddenly done, and I am left holding a responsibility of which, no matter how much I try to anticipate, isn’t quite as easy to grasp as I had expected.

What to do? What have I done in response to this unfamiliar experience? Rest is paramount, along with walks in the forest and gently laps in the YMCA pool as well as few other self-care activities. My energy fluctuates and brain fog is disappearing.

I believe post creation depression exists on a continuum, from a day or two of lethargy to months even years of depression. After you have created something significant, what has been your experience? Please feel to share this in the comment box below.

PS Pre-publication offer I Just Want to Paint! includes FREE shipping within the continental US. It also includes FREE PDF downloads of the entire book coupled with live ZOOM calls with me to discuss the content. These calls begin November 14th.