International travel is one of my favorite ways to experience our world and open my eyes to new perspectives, cultures and life styles. In addition, it challenged me physically because San Miguel de Allende (SMA) is built on a hill and there is rarely a flat area larger than a block. Stairs are everywhere and the old streets and sidewalks require vigilance to avoid tripping. Despite this, I walked for miles. I can’t remember when I last walked 2-5 miles a day for 8 days (thanks to my Fitbit I know)! 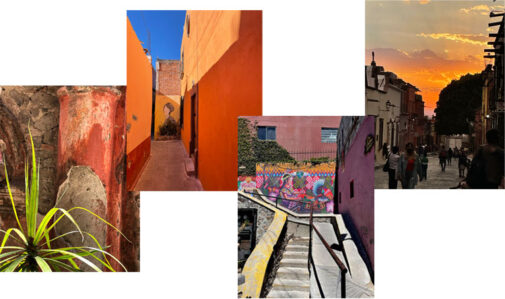 Why SMA? It was an art workshop that enticed me to Mexico. Last fall I had decided that I wanted to improve my ability to convey drama and to be more consistent with impactful compositions. When a workshop taught by an abstract painter entitled “Contrast and Composition,” crossed my email, I decided to sign up. I was also ready to travel after a long dry spell.

Fortunately, I arrived three days before the 5-day workshop. This allowed me, in delightful summer like weather, to explore. The first day I was alone with a limited map and managed to get lost! SMA is such a jam packed city and fortunately I knew I was never too far from center city so I wasn’t too concerned, just frustrated. While walking and trying to figure out where I was and wanted to go, I realized I had made a significant mistake when I decided to travel in Mexico. I didn’t brush up on some basic Spanish. Several years ago I I participated in a month-long artist residency in Costa Rica. Before leaving I had taken a Spanish class and listened to audiotapes, which enriched my experience there and facilitated my ability to connect with the people there. I should have done that this time, but had been misled that English was spoken everywhere in SMA. Consequently, I was not able to interact with SMA residents as much as I would have preferred and it felt disrespectful, on my part, for not updating my language skills.

On another day, I was able to visit a few contemporary art galleries with exquisite work – check out the magnificent painting below – and I enjoyed street food freshly made on the spot. I was reminded that many of the fruits and vegetables we eat in the US are grown and harvested not far from SMA. The fresh juices they make are to die for.

One of my favorite places was the artist market. It is the width of an alley, three long blocks and requires hiking up or on stairs the entire way. Below you can see booths and the festive atmosphere. Several items were purchased, which was great fun. Each will bring back fond memories. 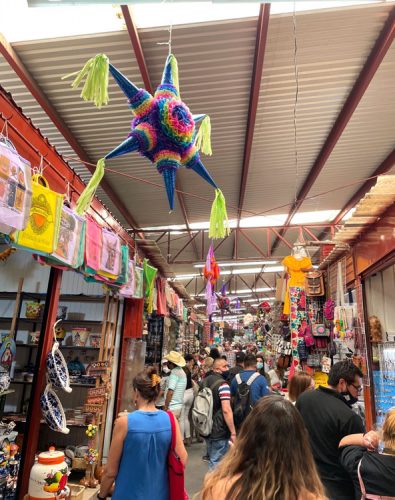 As a former school psychologist (though one may ask, “Is one ever a “former” psychologist. LOL!), I like to observe and take notice of my surroundings. One startling observation I made was watching the caring and calm relationship between parents and their children. In eight days walking in crowded streets filled with families, particularly during a weekend, I never heard a child scream, have a tantrum or need to be disciplined. Nor did I hear/see a parent express displeasure toward a child. This would not happen in the US.

I started noticing how gentle and patient Mexicans are. Granted, their pace of living is slower, but it was even evident on the roads. There isn’t a stop sign or light in the city center, though there are hundreds/thousands of cars in extremely narrow streets dodging and yielding as everyone traversed – including pedestrians – to their destinations. It was fascinating to watch the weaving dance between the cars, taxis, buses and vans. It was almost like it was choreographed. Unlike NYC, Rome or Paris, I rarely heard a honking horn. The drivers are assertive, not aggressive.

On another excursion, while alone, I became very lost trying to return to a store I had seen two days earlier. It was an early Friday evening and I managed to get completely turned around away from city center. After about a mile or two, I realized I had not a clue where I was…..and I am someone who has a good sense of direction. Not there or then! I knew I was the only white tourist in a neighborhood not frequented by taxis, which is rare because taxis are everywhere else. However, I never felt afraid. I always said “Good evening,” in Spanish while smiling to people I passed and walked as if I knew where I was going, but not a male jeered nor act inappropriately. Again, this would not have happened in the US, I am quite sure.  To escape my dilemma, I called my hotel front desk asked them to order me a taxi. I arrived back safely. All was well but I never found the store! Argh! 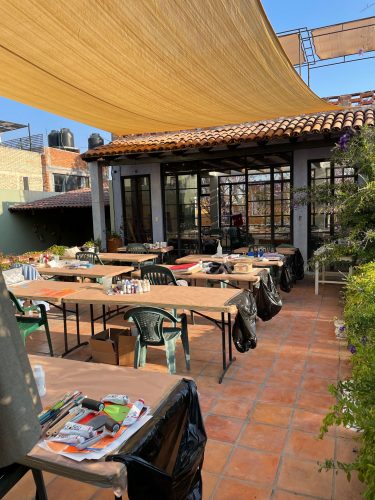 Workshop area the morning before it started.

All of this has caused me to pause and ask, “Why is this country and its people so vilified?” We all know why….. along with the drug cartels who have damaged Mexico’s image. I realize I was only experienced one large city in an area of Mexico that is not on the drug distribution routes, but I believe I witnessed something special that will forever impact me. IMHO, I believe we Americans have many things we could learn from the Mexican people.

You might be asking about the workshop…? The jury is still out on how much I learned and I am not sure the skills I was hoping to improve upon were challenges. My awareness on how to look at my work and others was heightened, and my artist’s language was expanded upon, but it was not to the extent I was expecting. We completed rigorous and challenging exercises, but there was little discussion as to how to integrate these into our work. For example, there was not a wrap-up session at the end of 5 days to discuss the art principles that were taught nor a group discussion about how the other artists thought about the workshop’s impact going forward. I would have loved to have heard what the others intended to take back to their studios.

The other disappointment had to do with the fact that the instructor never incorporated our location – San Miguel de Allende – into the workshop. We were not taken out to notice various compositions in the city nor the colors or architecture. We did not have a field trip to an art museum or gallery. In other words, the workshop could have taken place in Fort Dodge, IA (I was born there and know it well.) I will add that I adored my fellow artists, enjoyed getting to know them, and look forward to keeping in touch with them.

Am I glad that I went? Yes. Next time I will better prepared.

Thank you for reading,