Have you ever thought about painting in a series? If not, why not? …And what is it?

A series is a cohesive collection of paintings whereby the viewer has no doubt the same artist has created each piece. A series communicates a common thread that connects the paintings. Every painting can standalone, but together the visual impact is greater.

The series’ common thread can be established in a number of ways, including: technique, color palette, subject, medium, size, etc. This theme or thread is stated and restated in different yet interconnected ways. This facilitates the viewer’s ability to understand more easily what the artist is saying visually.

One of my first series, back in the early 1990’s, incorporated musical instruments and flowers. They were painted in watercolor and each was a full sheet or 22″x30.” Notice the unique edge on each piece and that the flower’s petals are strategically placed as if they are playing the instrument. There were 12 in this series.

Paint a series conveys commitment to a concept or theme which demonstrates the artist’s creative abilities and the depth with which they can explore their chosen direction. Most importantly it tells a story, making a deeper connection between the artist, their work and the viewer.

Typically, once a series begins in the studio, it can take on a life of its own with each additional painting. The original thought evolves, and the artist’s visual voice becomes clearer and louder. It is a facinating ride!

Some artists resist painting a series. They fear they will get bored or believe they are limiting their creativity or will be pigeonholed. I have found the opposite to be true. It is both challenging and freeing. Deciding on the series’ concept is but the tip of the iceberg. It’s an opportunity to be be open to possibilities while pushing the creative juices.

Will you run into a creative wall while painting a series? Of course. It’s a common if not expected experience during the painting a series process. It can be the “T” in the road forcing the artist to decide whether to quit or to carry-on.

It’s been my experience, both as a teacher and as a creator of several series, that this wall shows up somewhere around painting #6 to painting #10. Resistance flares up causing the artist to manufacture excuses as to why they need not continue. Self-doubt and fear of failure are often the sources of these excuses. However, I have learned that the rewards of persisting through this wall have always been worth the struggles and angst. Getting on the other side of this wall is key because this is when artistic growth occurs. Confidence increases, discoveries ensue, and the process becomes more enjoyable because the visual message is more obvious and clearer.

The next significant painting series I created in watercolor is entitled, “No Time for Idle Hands.” It commemorated the contributions women of the 1800’s made to this country. There are a total 26 images, all of which use the hand as the subject and a color palette of orange, purple and green. I created them between 1996 and 2000. 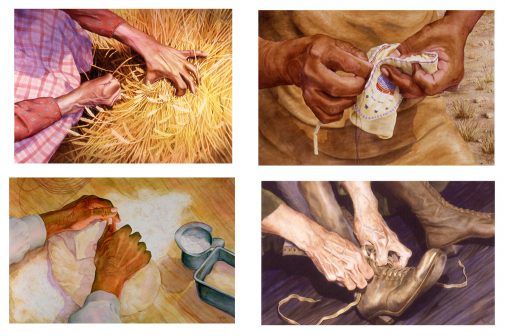 This series took me down roads and opportunities I could not have predicted when I started. And it challenged me technically, mentally and artistically. Ultimately, it traveled to several states, I wrote a memoir “Painting My Passion: An Artist’s Journey with Women of the West,” and I was commissioned to do several hand portraits. Who knew!?

What are the benefits to painting a series?

If you found this article informative, please share it with others.

Colorfully and gratefully yours,

PS In April 2021, I had a very successful solo show selling 14 of 18 paintings. I believe painting a series facilitated this success. It is entitled “Colorscapes.”