Have you ever mixed a wonderful batch of color, then applied it to your painting and it doesn’t work?  Suddenly it’s too dark, too light, too bright, too dull, yet when you mixed this color you were certain it was the perfect color for that area in your painting.

Or, you already have some colors applied on your painting that you like, you start adding more colors and surprisingly the original colors turn lighter on you? …or so it seems. Frustrating? Are you feeling a little nuts? I know that I have. What’s going on?

Are you familiar with simultaneous contrast? (Say it 5 times real fast and you might get a little tongue tied.) It is a visual phenomenon that seemingly plays tricks on us.

When you first heard the phrase simultaneous contrast – or if this is the first time you have heard it – did you shut your brain down because it sounds intimidating or complex or just plain confusing? I remember when I first heard the phrase, I rolled my eyes. The two words together didn’t make any sense in my pea brain. In addition, I questioned what role it played in my world as a painted.

Many years ago, when I first started studying color at the University of Minnesota, I was introduced to several important color principles. Simultaneous contrast was one of them. It was first identified by Michel Eugène Chevreul, a 19th-century French chemist. It refers to the way in which the colors adjacent to one another affect each other.  In other words, an area of a painting is impacted my the other patches of color in its nearby space. One color can change how we perceive the hue of another when placed side by side. Do you need proof? I did. Let me show you some examples.

During my invigorating color coursework at the U of M, we had homework that consisted of painting several different examples of this visual phenomenon called simultaneous contrast. Below you see how a gray strip of color changes in hue when it is painted within an area of orange versus in an area blue. Compare the two vertical grays. Notice how the gray has been altered by its surrounding color. Within the orange the gray is cooler or bluer, whereas within the blue it leans toward a warmer gray. The colors themselves don’t change – I have not painted two different grays – but we see them as altered. 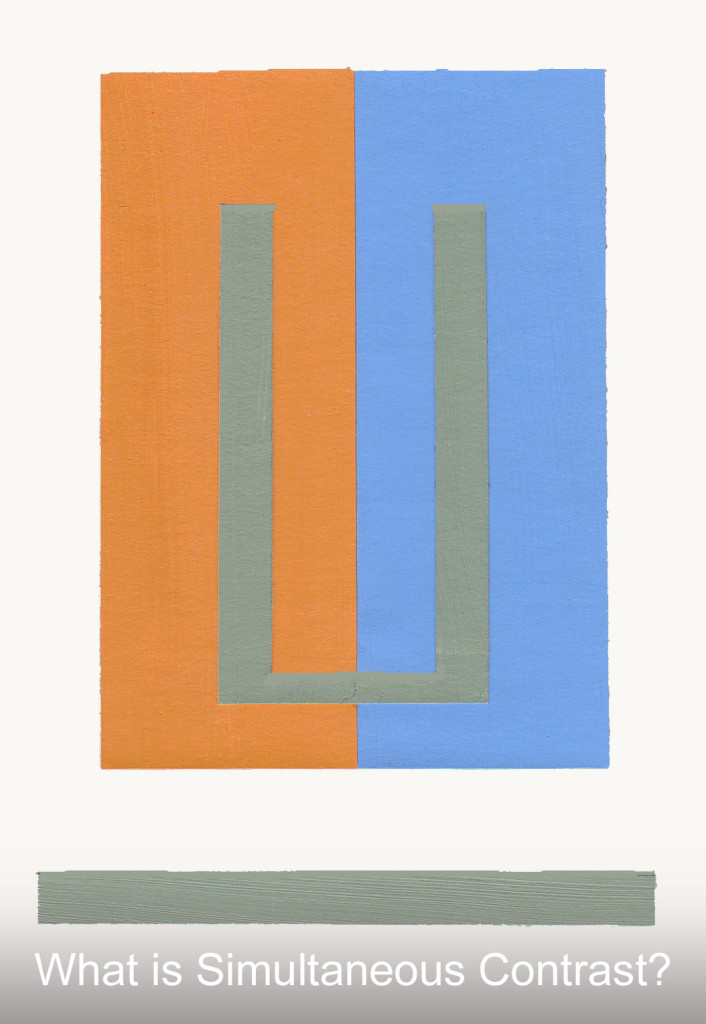 Why is Simultaneous Contrast Important to Artists?

It shows up in our color mixing and painting all of the time. Knowing how simultaneous contrast works, makes painting less frustrating. Once you understand it, then you will not be surprised by it. You can learn how to compensate for it or take advantage of it.

Here is a simple example where I painted two green swatches (using the same mixture) and then painted two very different colors around them. Isn’t it fascinating how the sea green nearly disappears into the whitish background, yet sings when surrounded by the more intense and darker blue? Don’t you feel like your eyes are playing tricks on you?

Landscape painters encounter simultaneous contrast all of the time.

Here is a common mistake students make: Many instructors of landscape painting will strongly suggest that students paint their initial layer of sunlit sky much darker than the student ‘sees’ the sky they are painting. Why? Because as soon as the darker trees are painted in, the sky color becomes too light.

Then in Figure B, I took artistic license and changed the value of the shadow side of the tree trunk just under the leaves. I did this because I did not want the trunk to stand out as much. Suggestion: when you study a landscape painting, notice if the artist changes the colors of a fence post or telephone pole using simultaneous contrast. In my tree below, I could have darkened the lower section of the right or sunlit side of the tree trunk in Figure B, if I did not want it to stand out. 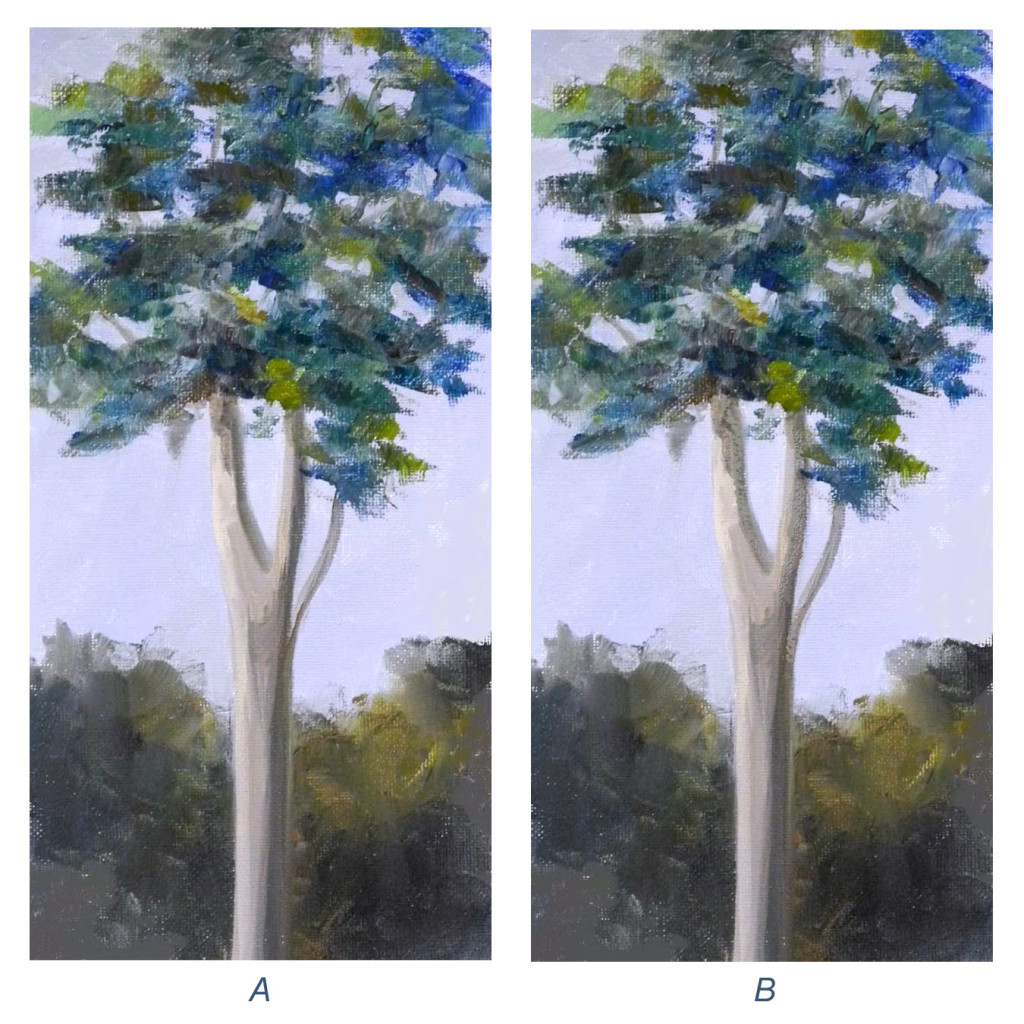 Michel Eugène Chevreul proved that simultaneous contrast teaches us that everything is affected by its opposite. In other words, a color will look lighter when placed next to a darker color (as seen in my green color swatch example), and warmer when placed next to something cool (as I showed in the orange and blue swatches with the gray strip), and visa versa. This phenomenon is similar to a more common scenario: A Labrador will appear large when standing next to a Boston Terrier, yet when it stands next to a Great Dane, it looks small. The dog, in this case the Labrador, didn’t change, but the context did; this is what happens when we apply color to our paintings.

Let me explain it a bit further. When I paint, I can decide how I want to change the color relationships.

It’s vital to remember the importance of color relationships. A color might appear cool in one setting and then warm in another due to the relationship it shares with the adjacent colors. This is why the choices we make when painting have ramifications.

We are taught that the three most important color terms are: hue, value and chroma/intensity per Albert Munsell. However, a fourth term or concept needs to be added. It’s moniker is ‘relationship.’ The concept of color relationships is often left out in most color courses. Every color owns its hue, value and chroma, but only by the colors that are adjacent to it.

In this cube of many colors seen below, I have another example of simultaneous contrast. On the left, you see the cube sketched out, with its cast shadow painted and two brown squares — one on the top side of the cube and one in the front or shadow side. Now, notice what happens to those two brown squares when I paint different colors representing various hues, intensities and values, around them.

This is exactly what happens when you mix that seemingly perfect color on your palette, but when you go to place it on your painting, it can look very different. Perceptually, a color can change because of the color next to it. It didn’t change, but its relationship did. The way it appears on your painting is all its color relationships. It is magic? No, it’s our brain working hard to make sense of our visual world. I think it is fascinating, don’t you? 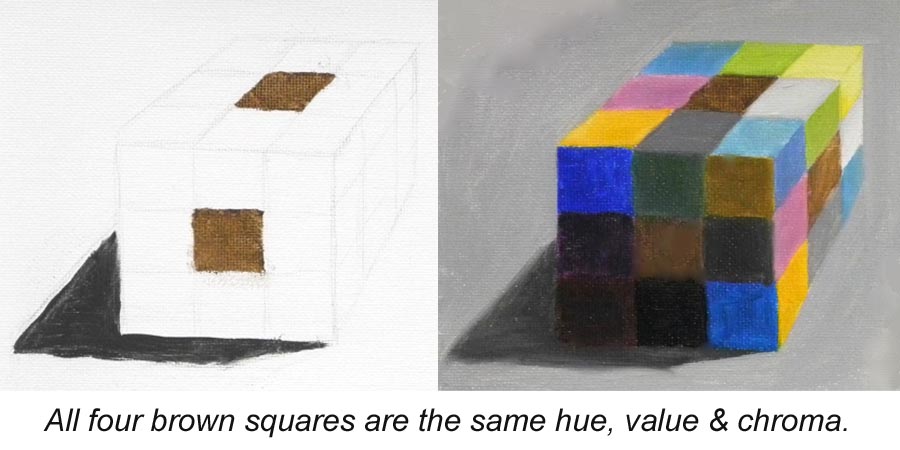 Every color in our visual world has a relationship. By understanding these relationships, we’ll make better choices and end up with paintings that better relay what we want to visually communicate. The mind makes judgments from the information provided by the eyes, so it’s imperative to learn to see the relationships and with sensitivity.

One of our ‘fathers of color,’ Josef Albers (1888-1976), stated that, “Simultaneous contrast is not just a curious optical phenomenon; it is the very heart of painting.” Do you agree or disagree?

Simultaneous contrast is one of the least discussed color principles, yet it is critical to your success as a painter. Let’s stop neglecting it.

Please share this blog post with anyone who has an interest in the magic and logic of color. Use the buttons below.

Together, let’s bring more beauty into the world!